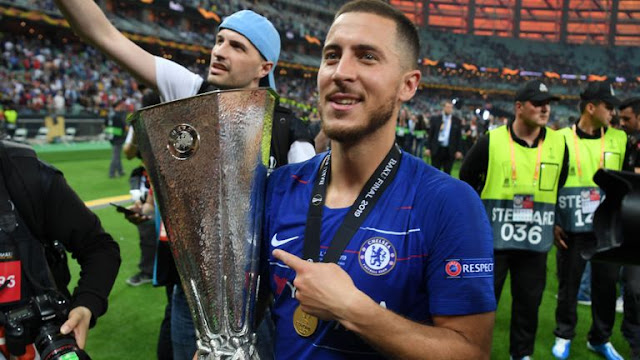 Chelsea produced an emphatic second-half performance to beat Arsenal 4-1 in the Europa League final in Baku on Wednesday as Maurizio Sarri won his first major trophy.

Coupled with a third-place finish in the Premier League it has made for what, on the face of it, is a strong first season for the Italian coach and yet his future is uncertain.

The same is true of Eden Hazard, Chelsea’s two-goal hero on the night, and with a transfer ban looming, there are plenty of questions to be resolved at Stamford Bridge.

What does the future hold for Maurizio Sarri?
Sarri has two years left on his Chelsea contract but speculation is mounting that his departure is imminent with Italian champions Juventus currently without a manager.

Sarri is understood to have met with Juventus officials and footage also appeared of Chelsea chairman Bruce Buck in discussions with Juventus counterpart Andrea Agnelli in Baku.

When asked before the game whether this would be his final game in charge, Sarri replied: “My future is Wednesday. I can only think about the final at this moment.”

Publicly, the stated intention is to discuss his future with Chelsea after the Europa League final as he wants to know “if they are happy” with his work this season.

Privately, the proposed switch appears to be gathering pace and with Chelsea fans less than enamoured with Sarri, the chance to be paid compensation for his services could be seized.

Who would come in as Chelsea’s new manager?
Speculation that Frank Lampard would be the prime candidate for the job if Sarri were to move on broke on the eve of Derby’s Championship play-off final against Aston Villa.

Lampard stopped well short of dismissing those links, instead speaking of the awkwardness of the timing. “It’s been a bit of an obvious link all season,” he said.

“I find it quite difficult because they have a game coming up.

“More importantly for me, we have a game before that. They also have a manager in Sarri who is trying to get them to win that final.”

Derby’s subsequent failure to win promotion to the Premier League, coupled with Chelsea finalising their commitments obviously removes some of that uncertainty.

While Derby owner Mel Morris said recently that there had been no approach for Lampard, he acknowledged that a reunion is almost inevitable eventually.

“I’m sure Chelsea and Frank will re-unite at some point, and if that ever happened, you’d understand because that’s his club,” said Morris.

What is the situation with the club’s transfer ban?
The good news for Chelsea is that their relatively strong finish to the season was enough to lift them up to third and secure Champions League football – a vital boost to revenue.

The bad news is that strengthening the squad could be tricky regardless of that revenue or the identity of the manager because of the transfer ban imposed on them by FIFA.

Football’s governing body initially imposed the ban in February for two transfer windows, following an investigation into the club’s signing of foreign players under the age of 18.

The rules state no player under 18 is allowed to move to a club in a different country unless their parents are moving there for non-footballing reasons, or unless they are aged 16 to 18 and moving within the European Economic Area.

Chelsea were disappointed when their appeal failed earlier this month. They refuted the findings and insisted they would appeal to the Court of Arbitration for Sport.

However, CAS has not yet received an appeal from Chelsea over their transfer ban.

What does all this mean for Eden Hazard’s future?
Given the likelihood that Chelsea will be unable to bring in new players that could complicate Eden Hazard’s proposed dream departure to Real Madrid.

The star man has made no secret of his desire to represent the Spanish giants and spoke before the final of his hope for a perfect farewell in Baku after seven years at Chelsea.

As far as Hazard is concerned, his mind appears made up.

“Yes, I have made my decision but it is not just about me,” he said following the goalless draw with Leicester on the final day of the Premier League season. He expressed similar sentiments out on the pitch in Baku too.

It is understood that Chelsea feel they are under no pressure to sell and negotiations over a proposed deal are being handled by Blues director Marina Granovskaia.

It is also understood that Chelsea want £130m for Hazard but Real Madrid value him at no more than €100m (£88m) due to the fact that he is entering the final year of his deal.

Sun Jun 2 , 2019
The latest on the players Arsenal have been linked with this summer – and who might leave the club as the Unai Emery revolution continues…“Our idea is to continue to carry on and improve with the young players that have arrived,” Emery said after the Gunners’ Europa League final defeat. […]