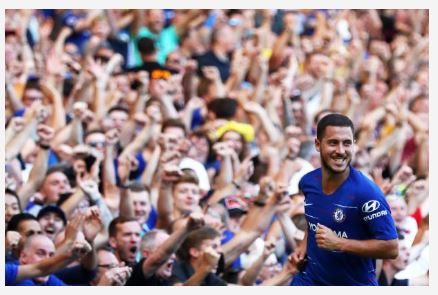 The Belgian has won the award for most assists in the 2018/19 top-flight campaign…
Eden Hazard is the Premier League’s Playmaker of the Season. He may not have added to his total of 15 assists for the season at Leicester today but no player elsewhere managed to overhaul that figure which is how the accolade is judged.

Hazard’s involvement in the latter stages of goals being scored in 2018/19 reaches 31 when those he scored and assisted are added together, his best such total since joining Chelsea.

Speaking after the game at the King Power Stadium, Hazard was asked which has been his favourite assist this season and what he prefers, scoring or making goals.

‘I just prefer to win the game,’ he replied.

‘When I see the ball in the net I am just happy for the other player who has scored but I think the assist for Ruben Loftus-Cheek against Fulham is maybe one of the best.

‘I try to play my best football every season and I think this year I was a bit lucky to make so many assists,’ he added, ‘because when you make assists you need the other players to score goals and for myself I think it is a good season but it could be better for the club. At the end we did our job of finishing in the top four and we are in the Champions League for next season, but it could be better.’

The Belgian was also asked about the acclaim he received from the Chelsea fans who were at the game.

‘It is a good story between us and that is why I give everything when I am on the pitch,’ he said.