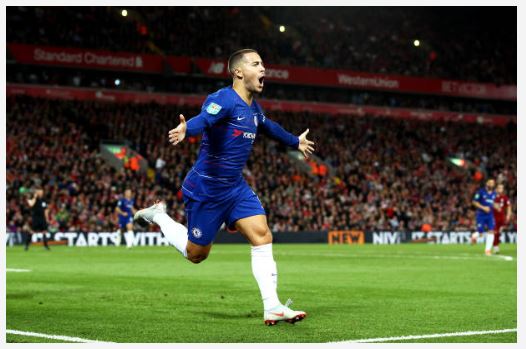 There has been a lot of transfer speculation about whom Chelsea could sign to replace star man Eden Hazard, but is the answer already at the club.


Hazard departs Stamford Bridge after seven successful seasons at the club, in which he helped the club win numerous trophies and become the most important player at the club.

But his departure has stirred up a whole list of debate about the ‘perfect signing’ to come in and fill the void, with the likes of Isco, Gareth Bale and Coutinho all linked with a move.

Coutinho is the man that Chelsea would prefer, if you believe all the reports, as speculation in the media suggests that he ‘likes the idea’ of replacing Hazard at Chelsea and becoming the star man at the London club.

But with the transfer ban meaning that Chelsea cannot buy any players this window, maybe Christian Pulisic is the man to lead Chelsea into a new era?

The 20-year-old American is likely to play on the right when everyone is back to full fitness, however, especially in pre-season, he might find himself on the left.

Pulisic is the fresh injection to the club this season and fans will be hoping he can really add something new to the Blues, especially with his creative ability.

His quality in the Bundesliga was obvious for many fans to see and the German side only allowed him to leave the club in January, as they felt that rising superstar Jadon Sancho could be the man that leads them into a new era.

He may not score the kind of goals that Hazard brought to the club, 28 in all competition last season, and he may not have that ‘superstar’ feeling that the likes of Bale or Coutinho may bring, but has the youth and talent to go on to become something special at Stamford Bridge.

Hazard has gone and he will not be looking back at the club that turned him into a superstar, but with the likes of Pulisic in the side, Chelsea may not need to spend £100 million on Coutinho.

The first 12 months of his Chelsea career will tell the fans all they need to know about him, but give him a few years, some patience and the right manager, he could develop into a player much more influential than Hazard was.

And obviously the right manager needs to come in and help Pulisic reach that next level of his career.