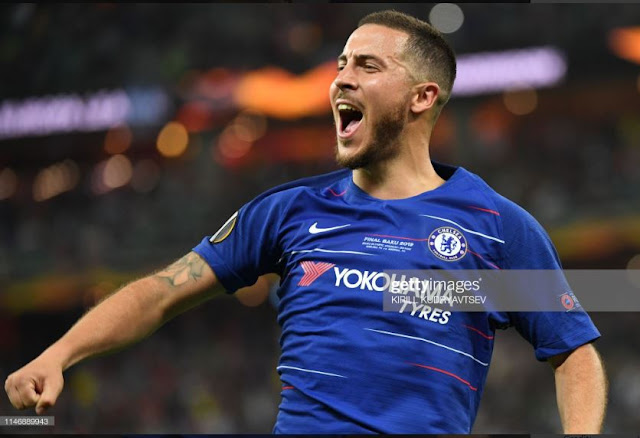 Eden Hazard scored twice as Chelsea thrashed Arsenal to win the Europa League. The Blues scored three goals in the space of 16 second-half minutes to take charge of the all-London final in Baku.

Olivier Giroud’s header against his former club – the striker’s 11th European goal of the season – put them ahead before Pedro doubled the lead and Hazard scored with a penalty.

After Alex Iwobi pulled one back for the Gunners, Hazard sealed the victory in what is expected to be his final Chelsea appearance before a move to Real Madrid.

Despite an often troubled season, Sarri has delivered silverware in his first campaign at the helm as well as guiding the club back to the Champions League.

Giroud opened the scoring when he got in front of Laurent Koscielny and stooped to nod in Emerson’s left-wing cross.

And when Hazard collected Mateo Kovacic’s pass and delivered the ball in from the left to Pedro, the Spaniard fired past former Chelsea keeper Petr Cech, who made his final career appearance before retirement from playing and a return to Stamford Bridge as technical director.

RELATED POST  Just In: Mateo Kovacic reveals what Frank Lampard’s asked him to do for the Club this season

Hazard then coolly netted from the spot after Giroud was bundled over by Ashley Maitland-Niles.

Iwobi, on as a substitute, gave Arsenal hope by thumping home from long range.

But Chelsea quickly hit back, with Hazard laying the ball off to Giroud and then applying the finish after collecting the striker’s return pass.